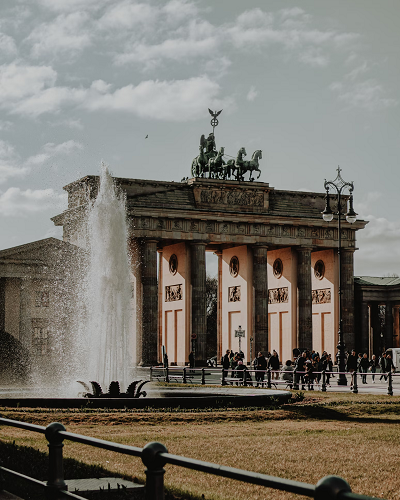 The Brandenburg Gate (German: Brandenburger Tor) is located in the center of Berlin, the capital of Germany. The now preserved Brandenburg Gate is a Classical Revival building built between 1788 and 1791 by order of King Frederick Wilhelm II of Prussia to commemorate Prussia's victory in the Seven Years' War.

The Brandenburg Gate witnessed the historical transformation of Berlin. From 1961 to 1989, residents of West Berlin could only watch the Brandenburg Gate from a few meters away from the Berlin Wall. The wall has been the boundary between Soviet-occupied and US-occupied areas since 1945. Carl Gotthard Langhans built the Brandenburg Gate after the Proripete Gate in Athens, but its six massive stone columns reflect the Neoclassical style.

If the Brandenburg Gate is the symbol of Berlin, the sculpture on it is the symbol of the gate. The Victory Chariot, drawn by four bronze horses, is the work of Gottfried Schardeau in 1793. This post will introduce more details about the actual size of this historical building.

Description About the Brandenburg Gate Size

The Brandenburg Gate is a neoclassical sandstone building supported by 12 Doric columns with a height of 15 meters each and a diameter of 1.75 meters at the bottom. There are walls between these columns, which divide into five gates; the gate in the middle is slightly wider, designed for the royal families. Until the abdication of Wilhelm II, the last emperor of the German Empire, in 1918, only the royal families and guests invited by the king were allowed to pass in the middle of the Brandenburg Gate.

The highest point in the center of the top of the Brandenburg Gate is a bronze sculpture of the goddess of victory about 5 meters high. The goddess spreads her wings and drives a four-horse two-wheeled chariot to the east of Berlin. She holds a scepter with a wreath in her right hand, and an outstretched eagle wearing a Prussian crown stands on the wreath. The sculpture symbolizes the victory of the war and is the artwork of the Prussian sculptor, Johann Gottfried Schadow. The inner wall of the gate is painted in relief with the greatest hero in Roman mythology, Hercules, the god of war Mars, and Minova, the goddess of wisdom, the protector of artists and craftsmen. 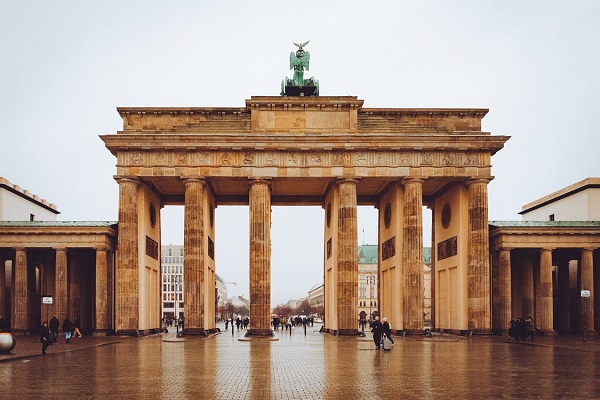 Size of the Brandenburg Gate 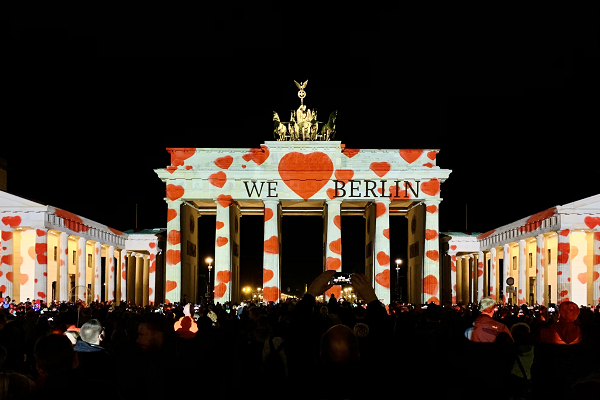