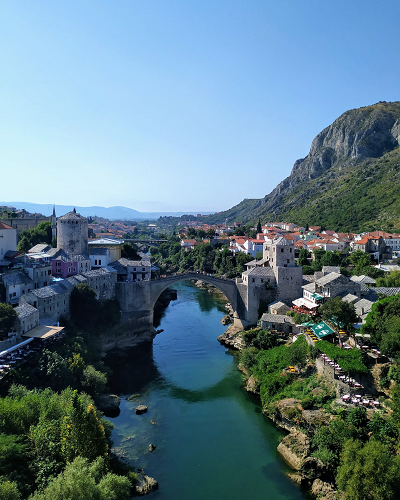 The Old Bridge of Mostar (Serbo-Croatian: Stari most) is a 16th-century bridge in Mostar, Bosnia, and Herzegovina. Mostar was developed as a border town in Turkey during the Austro-Hungarian Empire in the 15th-16th and 19th-20th centuries and is known for its old Turkish houses and bridges. The Old Bridge area is a fusion of pre-Turkish, Eastern Turkish, Mediterranean, and Western European architectural styles.

The Old Bridge of Mostar is an ancient building in Bosnia and Herzegovina, a 427-year-old stone arch bridge (built in 1566 and destroyed in 1993), spanning the Neretva River flowing through the center of the old city of Mostar. This bridge is not known for its size but for its long history.

The style of the old stone bridge is in harmony with the surrounding buildings with ancient stones as the main body and the ancient streets paved with big river pebbles, fully showing Bosnia's primitive style and artistic style in the 16th century. The Old Bridge connects the Muslim and Croat people on both sides of the river. This post will introduce more details about the Stari Most.

Description of the Stari Most Size

The Old Bridge can be called a spectacle in the history of architecture. The Old Bridge is an arched stone bridge with a stone bridgehead at each end. The bridge used 1,088 rectangular boulders, all quarried nearby, and took nine years to complete in 1556. About how to transport huge, how to erect scaffolding, etc., the construction process of the bridge is still a mystery, and all kinds of legends are recorded and preserved. The builder of the bridge is Mimar Hayruddin. After the bridge was completed, it became the widest artificial arch bridge in the world at the time.

In 2005, the Old Bridge Area of the Old City of Mostar and the surrounding area were approved as a cultural heritage and included in the World Heritage List. Every summer, young lads stand in the middle of the Old Bridge and jump into the Neretva River, which has become a unique sport on the Old Bridge and is the postcard and logo of Mostar. Today, performers on the bridge will jump after receiving enough tips. 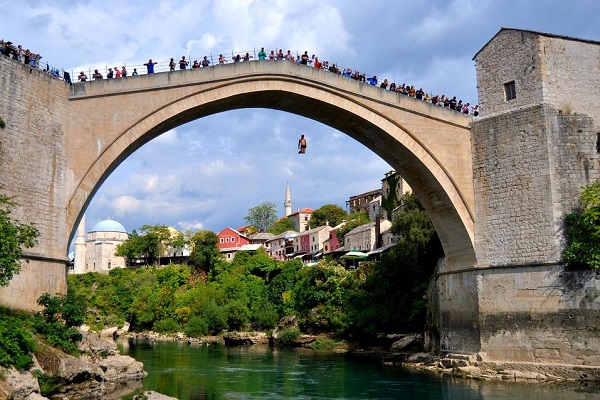 Dimensions of the Stari Most

The Old Bridge of Mostar is 4 meters wide and 29 meters long, and it was once the widest arch bridge in the world. The highest end of the bridge arch is about 20 meters from the water surface.

History of the Old Bridge of Mostar 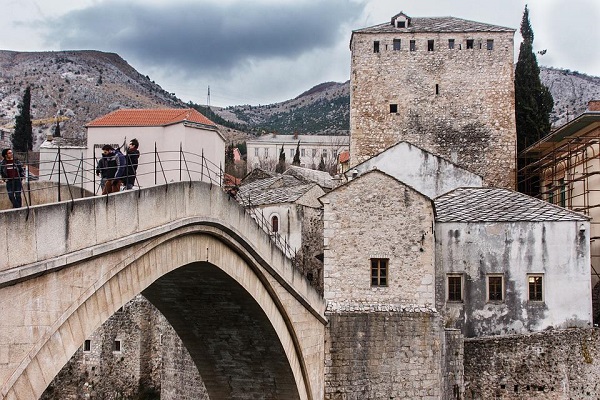 During the conflict in 1993, most of the ancient city and the old bridge designed by the famous architect Sinan were destroyed. Thanks to the efforts of the International Scientific Committee, the Old Bridge of Mostar was rebuilt. In October 1998, UNESCO established a national committee of experts responsible for the design and reconstruction. Divers from the Hungarian army scooped up the original stone from the river for bridge construction, while the rest were sourced from local quarries. The reconstruction of the Old Bridge began on June 7, 2001, and was completed on July 23, 2004. Nine young men jumped off the bridge that day to celebrate the reopening. 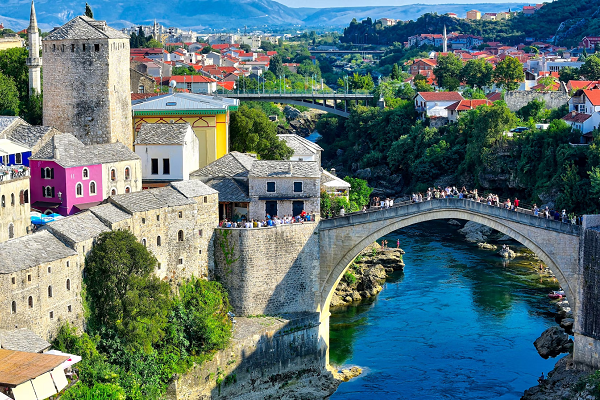 The Old Bridge is no longer an ordinary stone bridge but a symbol of multiculturalism and national harmony in Mostar. Mostar has gone through wars several times. The Old Bridge and the Old Town area witnessed a historical and cultural transformation over centuries, and visitors can still see bullet holes in the stone walls left over from the wars. Currently, the bridge is used for daily and tourist activities and attracts thousands of visitors daily.