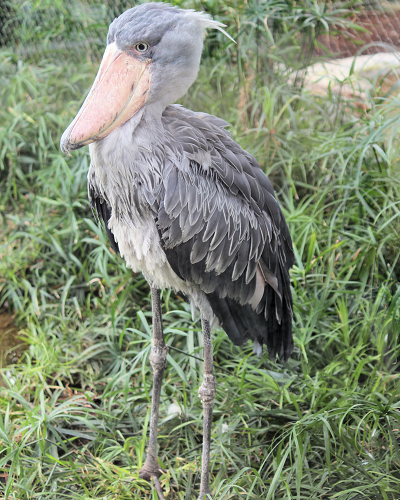 The shoebill stork (scientific name: Balaeniceps rex) is a large bird closely related to the stork family. It is the only species in the genus of the stork, and its name comes from its powerful beak. Shoebill storks mainly live in the huge swamps of the Sudanese Republic of Sudan and Zambia in tropical eastern Africa.

The shoebill storks prey on fish in the muddy water, build their nest on the ground, and lays two eggs at a time. The number of shoebill storks is estimated to be between 5,000 and 8,000, most living in Sudan. BirdLife International lists its conservation status as a Vulnerable Bird. The main reasons for the decline include habitat destruction, human disturbance, and hunting.

Even without its most distinguishable feature, the shoebill stork is grey and easily recognizable. People are always drawn to this large bird with a large, Dutch wooden shoe-shaped beak at zoos. This article introduces some basics about the shoebill stork.

This unusual-looking bird also has a huge mouth, 10 cm wide and 23 cm long, just about the size of a shoe, so it got a name: shoebill stork, which also has an interesting Latin name: Balaeniceps rex. They are sometimes referred to as 'Whalehead' for obvious reasons. This bird is so unique that it is difficult for scientists to classify it, so they have created a genus Cetacean specifically for it. Among extant flying birds, the whale-headed stork has a prominent body. Egyptian pharaohs marveled at this large bird in history books. The whale stork injured many Arab travelers in the Middle Ages, so it was regarded as a raptor. 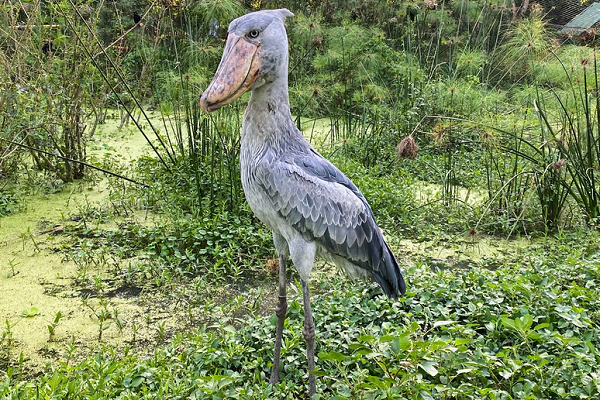 The heads of shoebill storks are large in proportion to the body. And the many-colored bill is wide and thick; the hooked beak is 8 – 12 inches (20 – 25 cm) long, 4 – 5 inches (10 – 13 cm) wide, and has cutting edges. Their beak is so sharp that it is said that it is the only enemy of crocodiles in swampy areas because it is also the only bird that can pierce the skin of crocodiles. Shoebill storks have yellow eyes and extremely long toes. The entire plumage is slate gray, with a green sheen on the back and a short crest behind the head. Males and females have similar coloration, with a small crest or white tufts sticking out from the back of the head.

Shoebill storks mainly inhabit the upper Nile or inaccessible lakes and swamps in tropical East Africa. Usually solitary or in pairs, all nocturnal. They hide in grasses or reeds during the day, come out to feed at dusk, and are rarely found.

It mainly feeds on fish such as lungfish and catfish and catches small crocodiles, soft-shelled turtles, water snakes, snails, frogs, etc. They hide their bodies in lush vegetation and like to stand quietly in the water when preying. They are the most patient "hunters" in catching prey in the water. 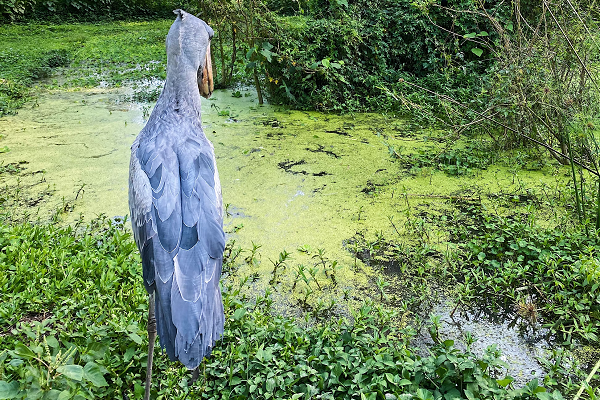 Shoebills reach maturity at three to four years old, and breeding pairs are monogamous. Females lay an average of two eggs at the end of the rainy season. As co-parents, both birds will incubate and turn eggs together and cool them with water they bring to the nest in their large bills. Incubation lasted about a month. Chicks have bluish-gray down covering their bodies and a lighter colored bill. The average life span in the wild can reach 35 years, while they can live up to 50 years in captivity.

The shoebill is a large, elusive, stalk-like bird with an almost prehistoric appearance due to its oversized shoe-shaped beak. Due to its rarity, many countries in Africa present the whale stork as a national treasure to zoos worldwide and issue stamps and currencies to highlight their unique animals. The overall number of shoebill storks has declined dramatically over the past decades. Legal protection for this species is provided in Sudan, the Central African Republic, Uganda, Rwanda, Zaire, and Zambia.