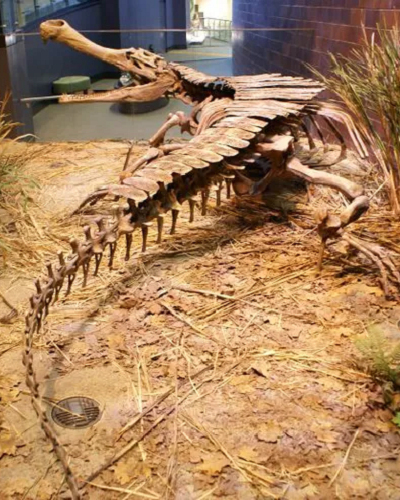 Sarcosuchus (scientific name: Sarcosuchus imperator), meaning "flesh crocodile" in Greek, was an extinct crocodile. During the early Cretaceous period, they lived in Africa and were one of the largest crocodiles, feeding on various prehistoric fish.

When it comes to enormous reptiles from the Cretaceous period, it is normal that most people will first mention T. rex. But while dinosaurs are often the star of the show, they were far from the only ones. Sarcosuchus, sometimes called 'super croc,' is a predator that even dinosaurs do not want to bump into.

Sarcosuchus was a true monster with a huge body and the strongest bite forces of any animal. They are distant relatives of living crocodylian species. The first remains were discovered during several expeditions led by the French paleontologist Albert-Félix de Lapparent, spanning from 1966 to 1970 in the Sahara Desert. Keep reading the post; you will get more facts about this prehistoric reptile.

The teeth and scale fossils of Sarcosuchus were discovered in the Sahara Desert by French paleontologist Albert-Félix. It wasn't until 1964 that geographers discovered the head fossil, which caught the attention of another French paleontologist, Philippe Taquet. He returned to Paris with the fossil, and France de Broin examined it. In 1966, they officially described and named the animal.

Sarcosuchus lived in the early Cretaceous period, about 110 million years ago. It is one of the largest crocodiles that ever lived on the earth. Its adult body length can reach 13 meters, comparable to theropod dinosaurs. The crocodile's sense of smell is very sensitive, and it can smell the scent of its prey even in the water; coupled with a huge mouth that is 1.8 meters long and full of sharp teeth, even a small dinosaur will become its prey. This extinct giant crocodile species would latch onto its prey with its backward-pointing teeth and drag it into the water to be drowned. 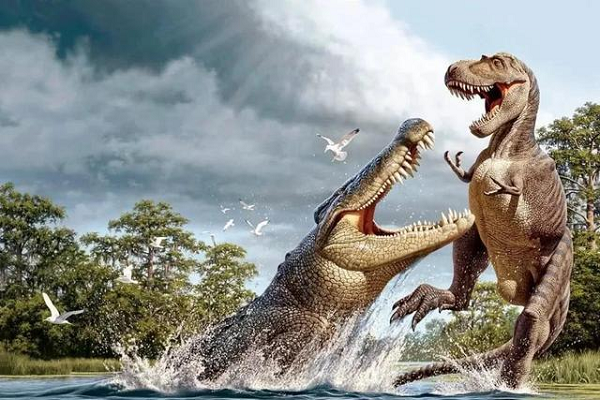 Since no complete skeleton has been found, the Sarcosuchus was calculated by measuring the largest skull fossil and comparing it with modern crocodiles. After measuring the average head-to-body ratio of the Indian crocodile and the saltwater crocodile, the researchers inserted the largest Sarcosuchus skull fossil (1.6 meters). They inferred that its average body length was 9- 11.5 meters, and it weighed 3.5-4.5 tons.

Sarcosuchus has a row of Osteoderms that cover their backs and can be up to 1 meter long. It had somewhat telescoped eyes and a long snout comprising 75% of the length of the skull. There were 35 teeth in each side of the upper jaw, while in the lower jaw there were 31 teeth in each side. The giant jaw has 132 thick teeth that Hans Larsson describes as railroad spikes. The teeth are conical, suitable for grabbing and gripping prey, rather than the narrow tearing teeth of modern crocodiles. 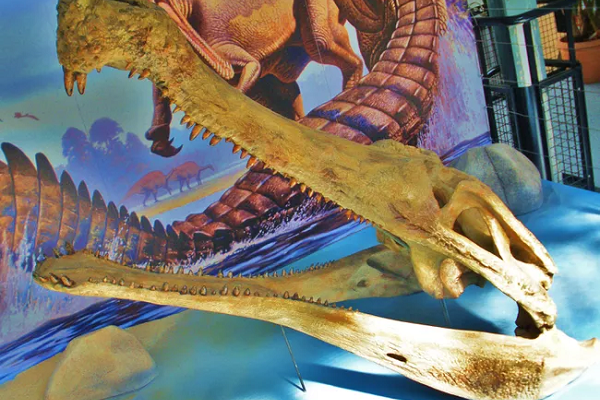 The largest Sarcosuchus should be the oldest. The bones of prehistoric reptiles have growth rings on them, like tree rings, which can be used to determine the age. However, this method of calculating age is controversial. Some scholars have proposed that in the absence of extreme climates in the Mesozoic, it is difficult to calculate the age of animals by calculating annual rings. Growth rings on Osteoderms, benchmarked against the largest known Sarcosuchus, show that these giant crocodiles have 50 to 60 years of lifespan and have kept growing steadily throughout their lifetime.

Paleontological investigations believe dinosaurs were not the only rulers on earth about 110 million years ago. Sarcosuchus lived simultaneously as the dinosaurs and was one of the most ferocious carnivores of its time. Thanks to these crocodile-shaped animals' thick and heavy skulls, paleontologists are more likely to find fossilized skulls of Sarcosuchus than other parts of their bodies.