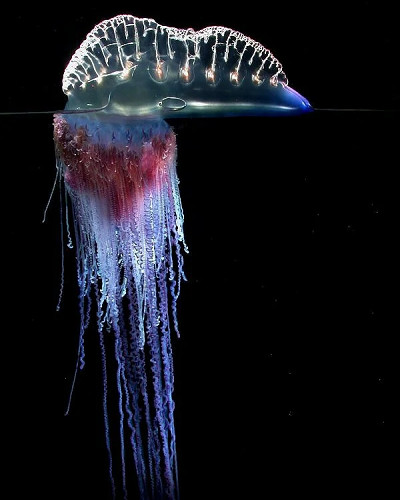 Physalia physalis is a kind of coelenterate with blue-cyan color; it has a luminous membrane crown on its buoyant sac, which can adjust direction by itself, and float on the water surface like a sailboat by the wind. Groups of blue sacs floating on the sea are reminiscent of the Portuguese ships in the navigation age, so people call the "Portuguese man of war."

The Portuguese Man-of-War is commonly found in tropical waters of the Atlantic Ocean and some in the Mediterranean. It inhibits the surface of the sea, with the crown floating and the rest of the body under the water. They cannot generate power and only move with wind, currents, and tides.

These jellyfish like to live in groups of 1,000 or more. In sailing, people often see transparent floating sacs drifting with the current, with blue-purple brilliance flashing under the sun. Although they look peaceful and beautiful, many marine animals are afraid to approach them because their tentacles are covered with countless stinging cells. Let's learn more about the size and characteristics of the Portuguese Man-of-War.

Size And Characteristics Of Portuguese Man-of-War

Physalia physalis is the only widely distributed species and occurs in warm waters throughout the world's oceans. The Portuguese Man-of-War jellyfish is not a single organism but a community of polyps and jellyfish. The structure floating on the water's surface is called a Pneumatophore. Below the surface, the mangosteen also has three polyps: Gastrozooid, Gonodendron, and Tentacular palpation. Each individual is highly specialized, intertwined with the other, and cannot survive independently. 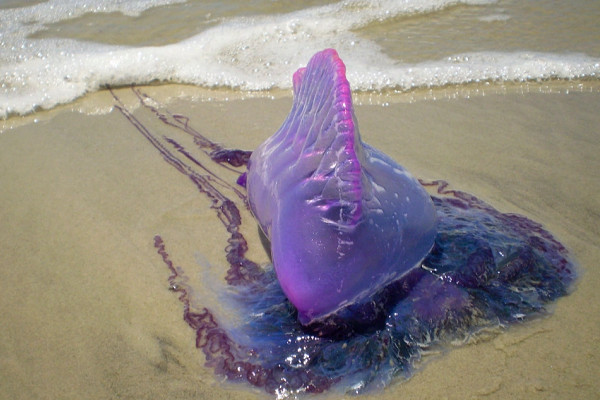 The size of a large, purple float (the pneumatophore) reaches up to 30 centimeters (12 inches) in length and 13 centimeters (5 inches) in width, and it is filled with gas, which allows Physalia physalis to float on the surface and travel with the help of wind. These long, thin tentacles can extend 50 meters (165 feet) in length below the surface, although 30 feet is more than the average.

Generally, these toxic jellyfish live in warm tropical and subtropical oceans. The Portuguese Man-of-War is dioecious; their larvae probably develop rapidly to small floating forms. Most reproduction occurs in autumn, giving birth to large numbers of small jellyfish in winter and spring. They have a lifespan of less than a year. 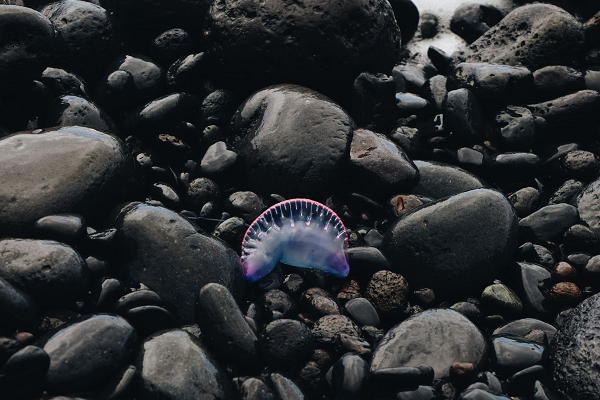 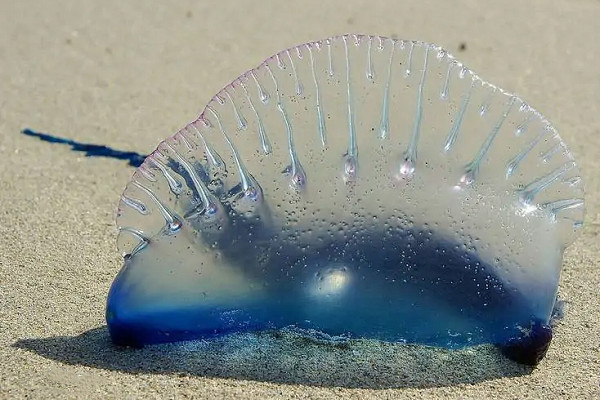 The Portuguese Man-of-War looks beautiful and like a colorful plastic bag from a distance; some people were attracted by its appearance. The toxins in Physalia physalis are complex high-molecular protein toxoids; when they touch human skin, they can cause severe pain like a high-voltage electric shock. In severe cases, it can cause human shock or even death. Even if you are treated in time and then recover, it will leave scars that are difficult to remove. The stinging cells on the tentacles will remain active for a long time after the Portuguese Man-of-War was washed up on the shore, so do not touch the jellyfish on the beach with your hands because of curiosity.