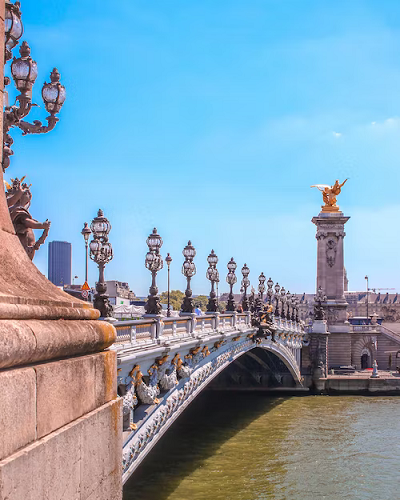 Pont Alexandre III is located on the Seine River in beautiful Paris and was inaugurated in 1900. It was donated to France by Tsar Nicholas II of Russia as a symbol of French-Russian friendship and was named after Tsar Nicholas II's father, Alexander III. The specially decorated Alexander III Bridge has been included in the historical complex since 1975.

The Pont Alexandre III, famous for its exquisite statues, is one of the most beautiful bridges in Paris and one of the postcards of the city. This bridge connects the Champs-Élysées and the Invalides district and spans the Seine, giving those who cross the bridge a beautiful view.

The little god of love holds the lamps on the bridge, and the symbolic image of the sea chief constitutes the theme of the bridge decoration. On the two columns on the left bank, there are French symbols representing the Renaissance and Louis XIV periods. On the two columns on the right bank, there are signs symbolizing ancient France and modern France. This post will share more details about the size of the Pont Alexandre III.

Designed by architects Joseph Cassien-Bernard and Gaston Cousin, the Pont Alexandre III consists of only one arch, and the height is strictly controlled to prevent its flamboyance from obscuring the view of the Champs-Elysées and the Palais Invalides. Each of the four 17-meter-high towers has gilded bronze horse sculptures that symbolize science, art, industry, and commerce. They are golden and regal even in rainy weather and can be seen from a cruise on the Seine or from the Eiffel Tower.

Several sculptors were involved in the decoration of the bridge. On the right bank is the artwork of the sculptor Emmanuel Frenette, and on the left bank, works by Pierre Granet and Clement Steiner. The lion on the right bank is by Georges Garden, and then another lion on the left bank is made by Jules Dalou. In the center of the bridge, one side is the fairy of the Seine with the French national emblem; the other side is the fairy of the Neva with the national emblem of the Russian Empire, both of which are bronze works by Georges Response. 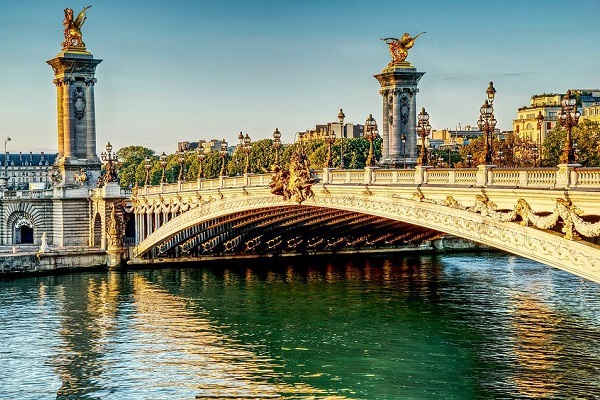 Dimensions of the Pont Alexandre III

Constructed by engineers Jean Résal and Amédée d'Alby, the Pont Alexandre III is considered a marvel of 19th-century engineering, measuring just 6 meters high over the river and its total length of 160 meters. The bridge consists of a single metal arch with a span of 107 meters, and its iron arches 40 meters wide. There are two towers at each end of the bridge with a height of 17 meters. 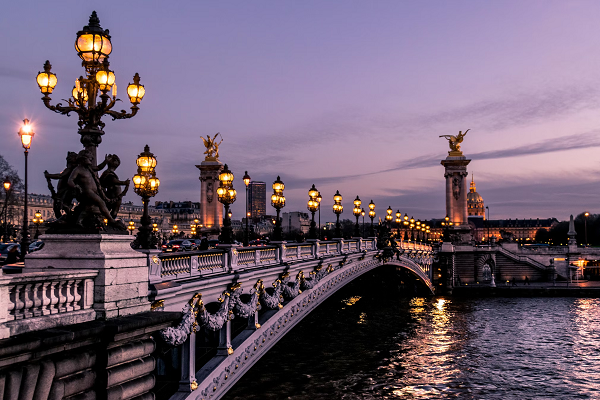