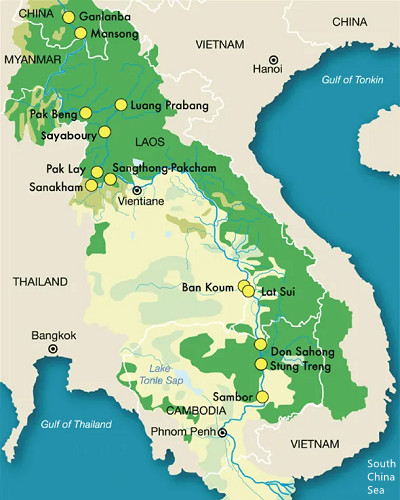 The main source is the Zhaqu River System, which originates in Zaduo County, Yushu Tibetan Autonomous Prefecture, Qinghai Province, China. It flows through China, Laos, Myanmar, Thailand, Cambodia, and Vietnam and flows into the South China Sea in Ho Chi Minh City, Vietnam. Except for China and Myanmar, all are the Mekong River Commission members.

The upper reaches of the Mekong River is the Lancang River in China, and the lower delta is in Vietnam. Because there are nine estuaries out of the South China Sea from Vietnam, Vietnam is called Cửu Long Giang. You will get more information about the Mekong River in the following post. 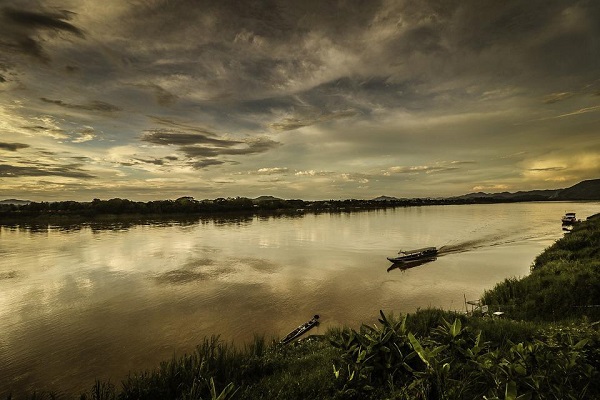 The Mekong River drains more than 313,000 square miles (810,000 square km) of land, stretching from the Plateau of Tibet to the South China Sea. Among Asian rivers, only the Yangtze and Ganges have larger minimum flows.

The annual water flow of the Mekong River is 475 billion cubic meters (114 cubis mi), ranking second among all rivers in Southeast Asia, second only to the Ayeyarwady River. The main water supply sources are precipitation in the basin and meltwater from snow-capped mountains, of which precipitation accounts for more than 1/2 of the river runoff, and the meltwater from snow-capped mountains accounts for about 1/6.

There are many tributaries of the Mekong River. Only in the upper reaches of the confluence of Zaqu are there nearly 400 large and small tributaries. The mainstream of the Mekong River has a wide valley with many bends. It enters the lowland through the Khone Falls in Laos and enters the Vietnam Delta after reaching Phnom Penh, Cambodia, where it meets the TonleSap River in Dongli. The delta area is 49,500 square kilometers, and the land is fertile. After passing through Phnom Penh, the river divides into two rivers, one is called the Mekong River, and the other is called the Basak River. The main tributaries of the Mekong are relatively short, with a length of only a few hundred kilometers.

The Mekong River Basin has a tropical monsoon climate. Affected by the southwest monsoon from mid-May to October, it is the rainy season, and from November to mid-March is affected by the northeast monsoon and is the dry season. Only the mainstream of the Mekong, affected by snowmelt in the Himalayas, began to rise in water levels in April. Due to the great changes in the flow during the dry and rainy seasons, and there are many rapids and waterfalls in the mainstream, the shipping capacity of the Mekong River is poor. Only about 550 kilometers downstream of the Mekong is navigable.

Such drastic changes in the water environment have formed a unique and diverse natural and ecological system in the Mekong River basin. The Mekong River basin is home to one of the richest areas of biodiversity in the world, with more than 20,000 plant species and 850 fish species, 430 species of animals, 1200 species of birds, and 800 species of reptiles and amphibians discovered to date. 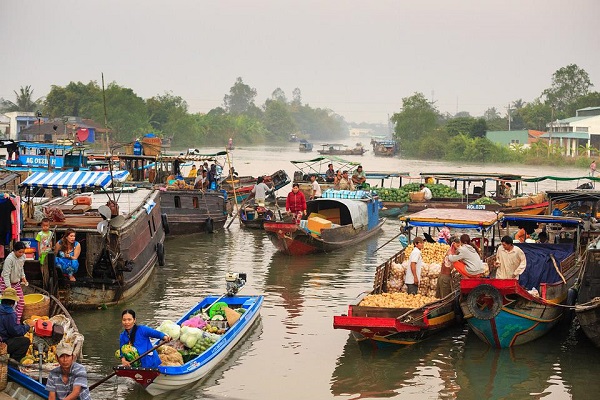 An estimated 80% of the nearly 65 million people living in the Lower Mekong River Basin depend on the river and its rich natural resources for their livelihoods, making sustainable development crucial for the environment and communities living in the basin. Today, the river is rapidly changing as economic development, urbanization, and industrialization transform the basin. The Mekong River contributes significantly to this growth through its opportunities, including hydropower production, agriculture, fisheries, and transport and trade.