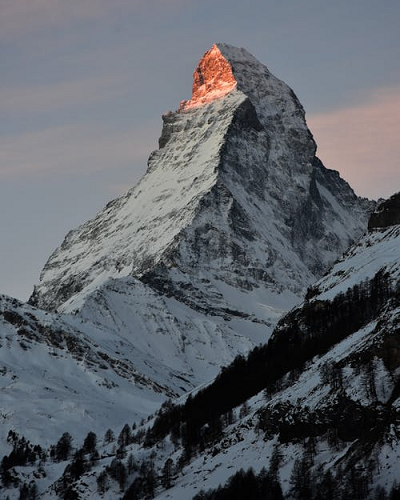 The Matterhorn is one of the most iconic peaks out there in Europe. It was rising behind the charming town of Zermatt on the Swiss and Italian border, close to the Swiss town of Zermatt and the Italian town of Breuil-Cervinia. It is a highly sought-after summit for mountaineers and adventurers alike.

Matterhorn is the most beautiful mountain in the Alps, and it is also a proud symbol of Switzerland. With its special triangular-cone peak shape, it has become the representative landscape of the Alps. Whenever the sun sets, the snow-covered mountains' summit reflects the light.

This 4,478-meter mountain in the Alps was first summited on 14 July 1865. It is favored by rock-climbing enthusiasts from all over the world for its unique shape and towering peaks. In addition, the mountain area is also a paradise for ski lovers.

The Matterhorn (Italian Monte Cervino, French Mont Cervin) was the last major mountain in the Alps to be conquered. The reason is the difficulties in climbing and the psychological fear that the steep shape of this peak brings to early climbers. The Matterhorn is just a distant beauty for tourists, but for climbers, the Matterhorn is the most exciting challenge. Due to the extremely steep and precipitous terrain, many mountaineers regard the Matterhorn as a difficult challenge. 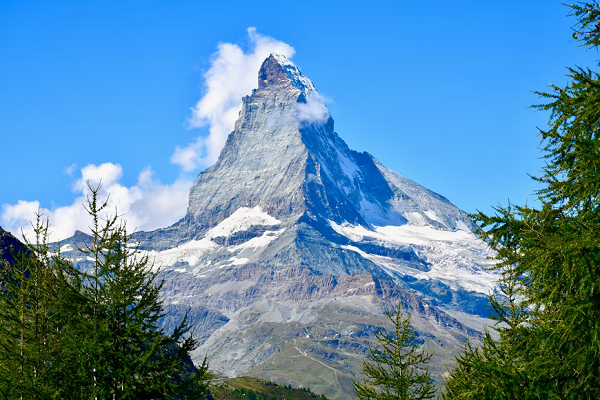 The formation of the Matterhorn (and the rest of the Alps) began some 50 to 60 million years ago when the African and Eurasian tectonic plates collided, and layers of sedimentary rock formed in the seas between them were thrust up above sea level. Experts suggest that the Matterhorn began as a rounded hill but gained its distinct pyramidal shape due to natural erosive forces over the last million years.

The Matterhorn lies above a plain, with no other higher mountains nearby. Matterhorn is famous for its four picturesque ridges (Hörnli, Furggengrat, Liongrat, and Zmuttgrat), splitting the mountain into four steep faces that rise above massive surrounding glaciers to the four compass points. Each face is so steep that only a small amount of snow covers the mountain's surface, with occasional avalanches pushing excess snow to the glaciers below the peak. 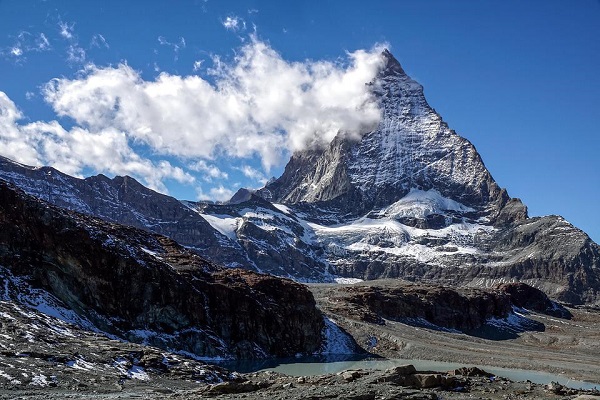 The Matterhorn frequently appears in various Swiss landscapes, attracting tourists from all over the world to enjoy the magnificent natural scenery. The small mountain village Zermatt on the northern slope of the Matterhorn has become the most famous tourist destination in Switzerland. Since Zermatt has implemented the prohibition of fuel vehicles very early and is located in a mountainous area at an altitude of 1,620 meters, the air here is fresh, towering mountains and magnificent glaciers surround the village, and you can ski all year round. As early as the 19th century, the world has The well-known ski resort is now the starting (terminal) station of Switzerland's famous scenic train, the Glacier Express, and the environmentally friendly smoke-free mountain village.