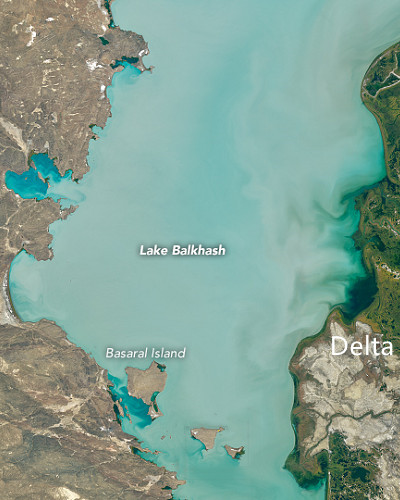 Lake Balkhash is entirely located in the Republic of Kazakhstan in Central Asia. It is an elongated east-west shape, the fourth-longest lake in the world, and the third-largest inland lake in Central Asia after the Caspian Sea and the Aral Sea.

This water body provides a precious water source for the survival and development of all ethnic groups in Central Asia. The Ili River in Xinjiang, China, flows into the western part of Lake Balkhash, accounting for 75% to 80% of the total water intake. Due to the lack of river inflow in the eastern part of the lake, the east and west have different hydrological characteristics.

Since the Han Dynasty, Lake Balkhash has been the natural dividing line of the northwest frontier of ancient China. It was called the Yibohai in ancient China. It was the place where ethnic groups in northwest China were active. In 1864, after China and the Russian Empire signed the unequal "Department of the Northwest Boundary," Lake Balkhash officially separated from China. After the disintegration of the Soviet Union, Lake Balkhash returned to the Republic of Kazakhstan.

Lake Balkhash lies in the vast Balqash-Alaköl basin at 1,122 feet (342 m) above sea level in southeastern Kazakhstan, between 73°20'-79°12' east longitude and 45°00'-46°44' north latitude. Lake Balkhash and the many inland rivers that flow into it constitute the Lake Balkhash Basin. The Sarymsek Peninsula divides Lake Balkhash into two parts, the east Balkhash lake is a saltwater lake, and the west Balkhash lake is a freshwater lake. The injection of the Ili River has formed a green delta at the southwestern end of the lake, a rare green area around Lake Balkhash. Balkhash city is built on the lake's north bank, an important copper smelting center, and the famous copper mine belt is on the north bank. The main lake ports are Bruer Baitar and Burliutobe. 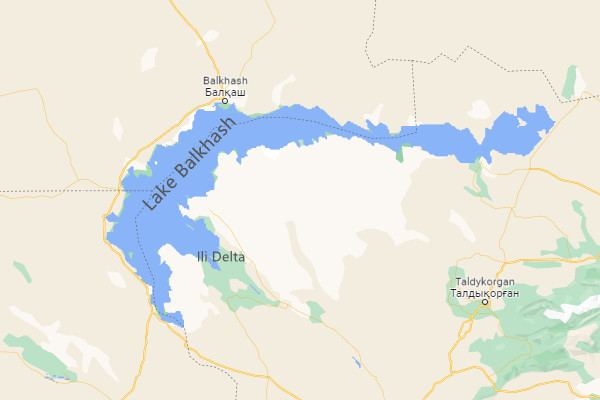 The main rivers that flow into Lake Balkhash are the Ili River, the Karatar River, the Aksu River, the Lepsy River, and the Ayaguz River. These rivers are mainly supplied by seasonal snow and rainfall, mostly seasonal rivers. Except for the flood period, a small residual flood flows into Lake Balkhash. The catchment area of Lake Balkhash is about 413,000 square kilometers, and the basin countries are Kazakhstan and China, of which 85% of the basin area is in Kazakhstan, others in China. Harsh climatic conditions prevail, and the warm summers and cold winters significantly affect the whole regime of the lake.

Lake Balkhash has obvious divisions: the eastern part is located inland, with scarce precipitation and strong evaporation, so the salinity is relatively high; although the western part also has the conditions mentioned above, a large amount of river water (mainly Ili River water) is injected into it to diluted, so the salinity is lower. The narrowest point in Lake Balkhash is only a dozen kilometers, and the lake remains frozen from the end of November to the beginning of April, which affects the exchange between the saltwater in the east and the fresh water in the west.

Carbonates predominate in the ground deposits of the lake. The fauna of the lake was formerly rich but declined from the 1970s owing to the lake's deteriorating water quality. Before these declines began, 20 species of fish inhabited the lake, of which six were peculiar to the lake itself. The large-scale water conservancy project construction and agricultural and animal husbandry irrigation in the Balkhash Lake Basin has resulted in a sharp drop in water level, deterioration of water quality, and salinity, destroying the Balkhash Lake wetland which has historically provided habitats for fish and birds. 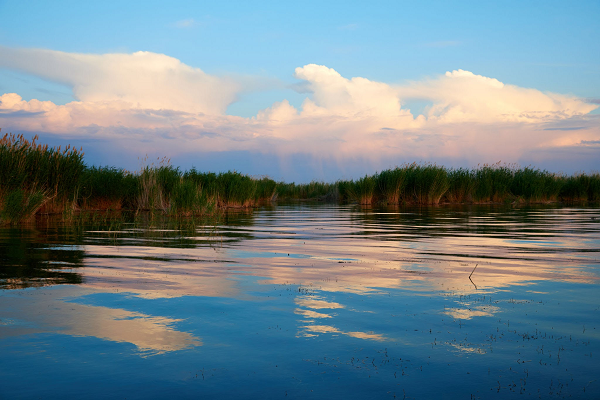 The Lake Balkhash basin is a unique landscape ecosystem in Central Asia, where 20% of Kazakhstan's residents live, 22% of Kazakhstan's water resources, and 42% of its water resources are concentrated. In the arid climate of Lake Balkhash, the mountains rely mainly on the supply of clean river water to nourish life in the basin. However, nearly 100 years of modern development history have changed it. Today, the basin is affected by drought and water depletion. There are a lot of deserts, swamps, and saline-alkali land, especially in the delta area of the Ili River.