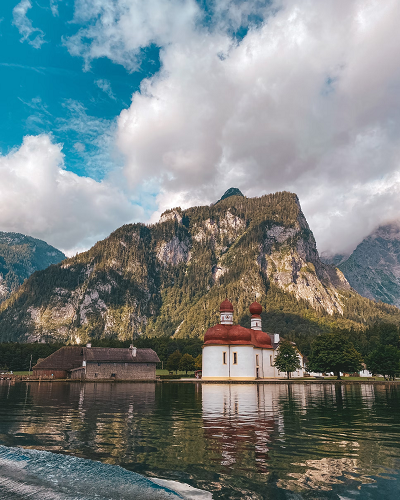 Lake Königssee (or just Königssee, "See" meaning lake) is located near the town of Berchtesgaden on the border between Germany and Austria. It belongs to the Berchtesgaden National Park and is surrounded by the Alps. This small mountain village is the most beautiful part of the German Alps.

The Königssee is the deepest lake in Germany. Formed by the erosion of glaciers, it has a landform that resembles a Nordic fjord, with lush green vegetation covering the mountain area. It is famous for its extremely clear lake water.

Summer is the best time to travel to Königssee. Every year, countless tourists spend their vacation here and visit the red-roofed church among the green mountains and clear waters. The Zauberwald on the lakeside is also a famous sight worth visiting. This post will introduce more interesting facts about Königssee.

Formed by glaciers during the last ice age, Königssee is located about 5 kilometers south of Berchtesgaden and is a long and beautiful lake. In 1978, to preserve the beauty of this region of lakes and mountains, the Bavarian government founded the Berchtesgaden National Park, which centers around the Königssee. The Berchtesgaden National Park is a famous tourist destination in Germany, including Koenigssee, Obersee, Hintersee, Kehlsteinhaus, Watzmann (the second highest peak in Germany), and other attractions. Königssee is famous for its clear waters and is considered the cleanest and most beautiful lake in Germany. For this reason, only electric, manual, and pedal boats have been allowed to sail on the lake since 1909. 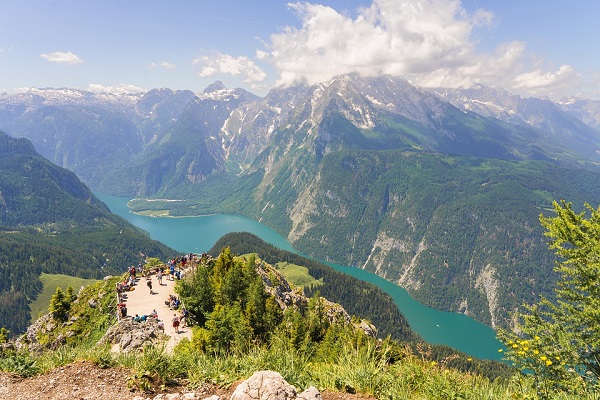 The lake has only one outlet, the Königsseer Ache at the village of Königssee. Because of the large size of Königssee, it is only likely to freeze during extremely cold and windless winters, which occur on average every eight years. When the lake freezes, boats stop. If the ice is thick enough to exceed 15 cm, the local tourism agency will mark a walking path to San Bartaro on the frozen lake. But visitors must strictly follow the directions of the signs, as the ice on the west side of the lake is thinner than on the east side. 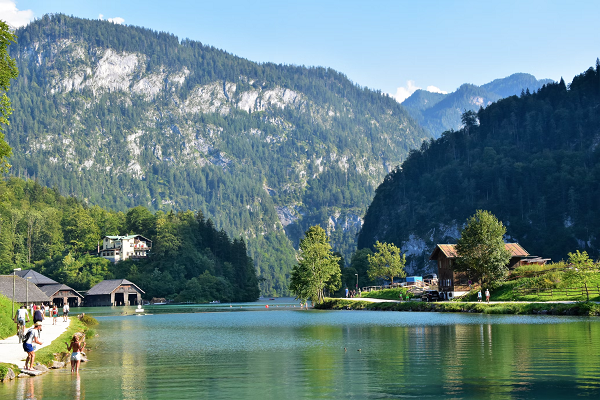 This lake area has been used for outdoor recreation for centuries; Bavarian royalty and the local rulers of Berchtesgaden and Salzburg hunted here, Hitler went boating on the lake, and Eva Braun liked to sunbathe on the shore. The greatest enjoyment in these fast-paced times is silence. As soon as you board one of the attractive electric passenger boats, all the noise, stress, and busy work are left behind. While crossing to St. Bartholomew, the boatman plays his trumpet to lure out the world-famous Königssee echo from the steep rock face.