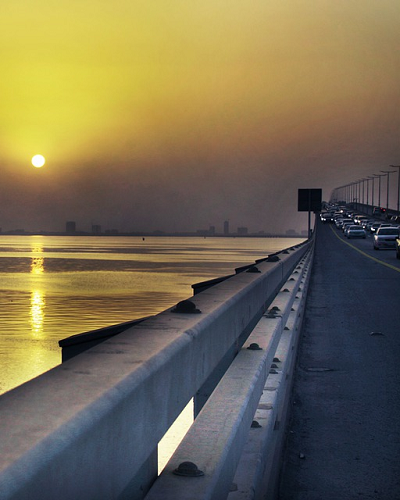 The King Fahd Causeway (Bahrain-Saudi Arabia Sea-Crossing Bridge) is located in the Persian Gulf and was once the longest sea-crossing bridge in the world. The total cost of the whole project is more than 1 billion US dollars. The construction costs five years and two months. The bridge was officially opened to traffic on November 1, 1986.

The Kingdom of Bahrain is located in the western part of the Persian Gulf and consists of 33 large and small islands, of which Bahrain island is the largest. As early as 1975, the International Bank conducted a feasibility analysis on Bahrain's economy and the implementation of the bridge project, taking into account factors such as geography, environment, and ocean currents. Finally, Saudi Arabia invested in the whole construction.

This super long sea-crossing bridge has a huge impact on the development of a wide range of economic activities and cultural communications between two countries. The King Fahd Causeway is known for its incredible size and complexity. Let's learn more details about this bridge in this post.

The King Fahd Causeway is a series of bridges and causeways which were built to connect the two kingdoms of Saudi Arabia and Bahrain in the Persian Gulf. The bridge starts from Jasra in the west of Bahrain Island to Al-Azizia in Saudi Arabia, with a total length of 25 kilometers, of which the reclamation part is 10 kilometers, and the bridge section is 12.4 kilometers, which is connected by five bridges. The No. 3 bridge in the middle is the navigation channel; there is a huge arch with a height of 28 meters and a span of 150 meters for ships to pass through.

The bridge deck has four lanes and sidewalks on both sides. It can pass 30,000 vehicles per day, and the design speed is 100 kilometers per hour. At the intersection of the waters of Bahrain and Saudi Arabia, two artificial islands have been built. Customs and border defense stations of the two countries have been set up on each island, and office buildings for immigration, passports, quarantine and other services have been set up. A tower hotel has also been built on the island to provide tourism services. Including auxiliary projects such as connecting roads, the entire project cost 1.2 billion US dollars, and the funds were all provided by Saudi Arabia. 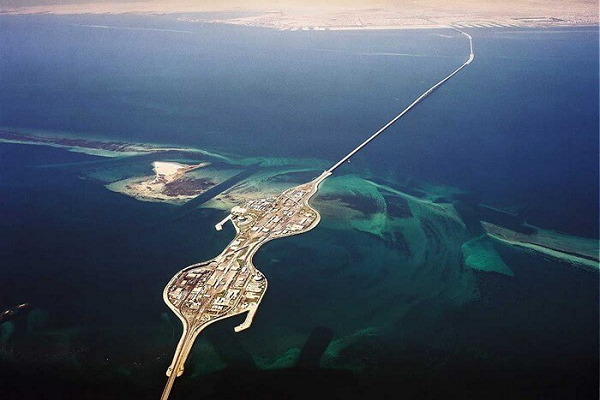 Dimensions of the King Fahd Causeway

The four-lane road bridge is 25 kilometers (15.5 miles) long and approximately 23 meters (75 feet) wide, and was built using 350,000 cubic meters (12,000,000 cubic feet) of concrete along with 47,000 metric tonnes of reinforced steel. There are five bridges along the entire causeway, total 12.43 kilometers (7.7 miles) in length. The first three bridges measure 934 meters, 2,034 meters and 5,194 meters in length and form part of the Saudi side. The Bahraini side of the causeway contains two bridges measuring 3,334 meters and 934 meters in length. Approximately 12.5 kilometers of the causeway has been constructed as a dam. 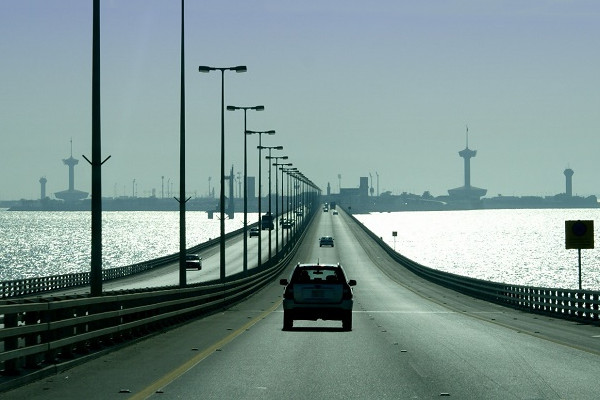 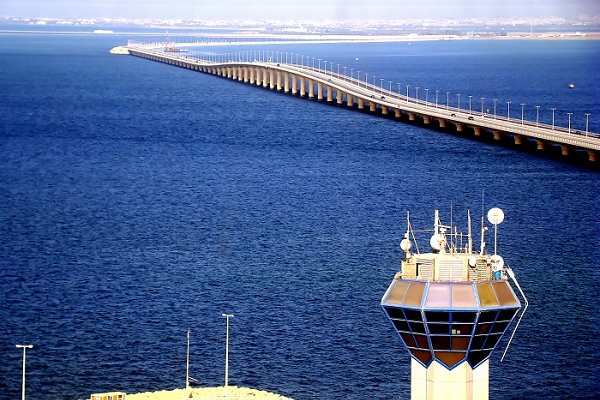 As a financial center of Bahrain, the King Fahd Causeway enhances the capacity for transit trade between Bahrain and the other countries of the Gulf. At present, King Fahd Bridge is of great strategic and tourist importance. It's worth spending two or three hours on this long bridge for the spectacular view of the bay. A high tower was built with the lookout platform on the middle island from which the wonderful panorama opens onto one of the largest bridges in the world.