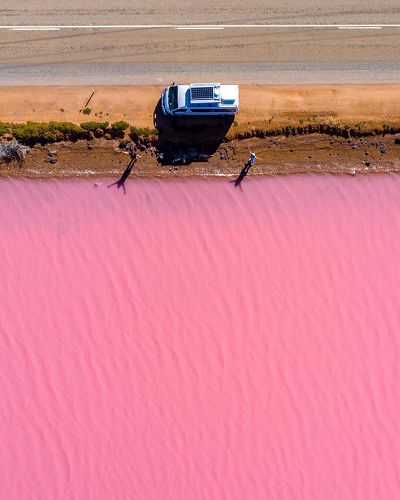 Western Australia's Coral Coast is known for some of the most colorful natural wonders in the country, such as red cliffs and pale blue waters. However, one of the most famous attractions is Hutt Lagoon on the Coral Coast. This dreamlike lake draws visitors from near and far and astounds onlookers with its vivid waters.

A six-hour drive from Perth along George Grey Drive takes you to one of the region's most splendid attractions, Hutt Lagoon. Or you can book Shine Aviation or Kalbarri Scenic Flights to see this intoxicating wonder from above. Hutt Lagoon is located 515km north of Perth, neighboured by the picturesque Port Gregory, and about 100 kilometers from Geraldton, a small coastal town on the west coast. It is the only way from Perth to Kalbarri National Park.

Depending on the season, time, and weather, the lake's color can vary from red, pink, or even lilac. It is hard to predict what the lake will look like at certain times of the year, as it is a natural phenomenon controlled by the elements. The lake's color is also dictated by how much algae is blooming at the time.

Hutt Lagoon is one of the best pink lakes in Australia. The geographical coordinates are 28°10'S and 114°15'E. It is a rare magical lake on the coastline of Western Australia and the largest powder lake in Australia. The Hutt Lagoon is below sea level, and the western shore of the lagoon is separated from the Indian Ocean by a series of beach dunes.

The magical lake was discovered by a British soldier and explorer, George Grey, on April 4, 1839, and named after Western Australian MP William Hurt. Since it was the rainy season, he mistook the lagoon for the mouth of the Hutt River. Hutt Lagoon is located at the junction of the Perth Basin and the Carnarvon Basin. It comprises quaternary sediments such as alluvium, colluvium, dunes, and beach sand, mainly white calcareous sand and quartz sand. 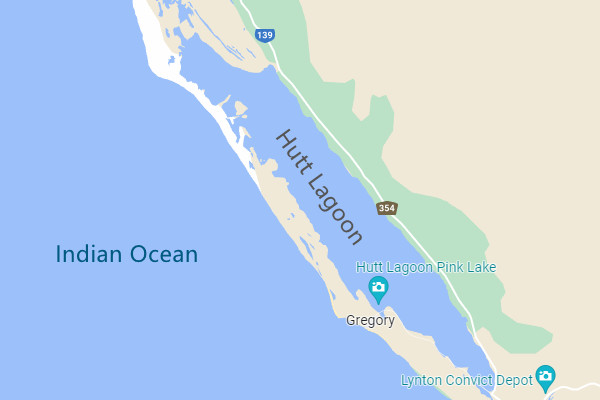 Hutt Lagoon is about 14 km (9 mi) in length along its northwest-southeast axis, parallel with the coast, and around 2.3 km (1.4 mi) wide. The lake has a maximum depth of 0.65 m (2 ft) when it's full, and its specific surface area will vary depending on the season and climate.

The Hutt Lagoon regulates its water balance mainly through evaporation and precipitation. It is in a Mediterranean climate zone with mild and humid winters and hot and dry summers. The average annual rainfall here is 449.7 mm, between May and August, which accounts for 70% of the annual rainfall, while the average annual evaporation is about 2445 mm.

Supplementation of the Hutt Lagoon comes mainly from sparse rainfall, surface runoff from several small streams in the eastern highlands, and groundwater seepage (especially the coastal dunes). The water depth of the lagoon is highly seasonal, reaching a maximum of 1 meter in 1992. In the hot, dry state of Western Australia, the lake has evaporated so much that Hutt Lagoon has even become a white salt pan.

Reason for Its Pink Color

Hutt Lagoon's iconic pink color comes from the presence of the carotenoid-producing algae, Dunaliella salina. Dunaliella salina is commonly used in cosmetics and dietary supplements as a powerful antioxidant; it is said to be fantastic for skin health. Hutt Lagoon contains the world's largest microalgae production plant and a commercial supply of brine shrimp, used as a specialty feed by prawn and fish farmers. 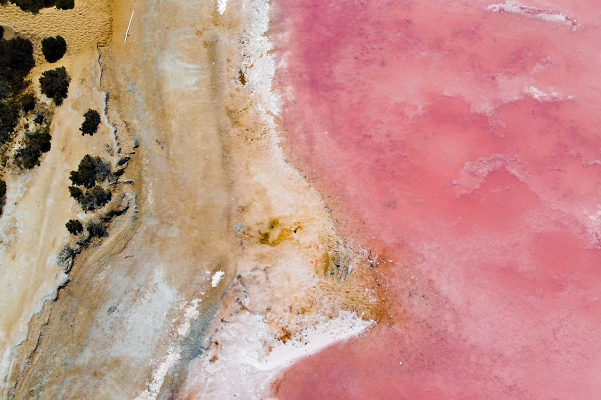 The extreme salinity gives Hutt Lagoon its unusual hue, which changes with the seasons and time. The best viewing time is September-November, spring in Australia. People may not see the Pink Lake in summer (January-March) because the evaporative lake dries up. Sunny days in the morning or sunset are the best times to visit. Overlooking Hutt Lagoon is the best way to appreciate the sight. From Geraldton Airport, the plane will fly north along the coastline and enjoy panoramic views of Geraldton City and the coastline sea view. After a 30-minute flight, you arrived over the Hutt Lagoon Pink Lake.