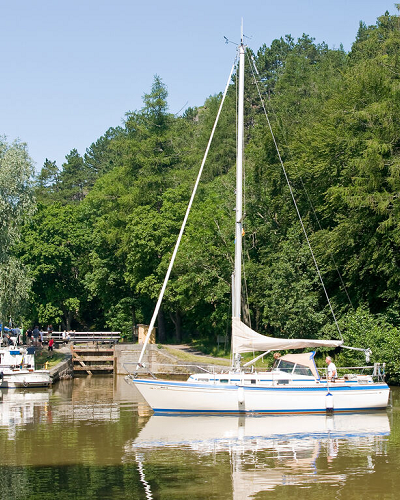 The Göta Canal runs through southern Sweden and was built in the early 19th century. This canal-based waterway passes through Lakes Vänern and Vättern and extends to the Göta River and the Trollheit Canal, connecting Gothenburg and Söderköping.

The canal connects with many lakes, rivers, and artificially excavated rivers from the Lake Vänern to the Baltic Sea, providing inland navigation from Gothenburg to Stockholm. The Göta River drains Lake Vänern, with locks to surmount the falls at Trollhättan, which is part of the waterway.

The construction of the Göta Canal was started in 1810 and completed in 1832. Over the years, the Göta Canal has been one of Sweden's most important waterways, with an important economic and strategic position. Today, the canal is primarily a recreational area for boating, hiking, and cycling.

History of the Göta Canal

The idea of a trans-Sweden waterway has a long history. Gustav I Vasa (king of Sweden) suggested building a canal through the Eskilstuna River, which was completed in 1610, and several canal sections were built over the next 200 years. A company to connect the Göta River to Lake Vänern was formed in 1790, and the first section, the Trollhätte Canal, was completed in 1800, allowing the seagoing craft to pass from Gothenburg to Karlstad and other ports on Lake Vänern.

Officially opened in 1832, the Göta Canal was dug by hand to some extent. During its construction, Swedish engineer Baltzar von Platen led 58,000 soldiers to excavate 87.3 kilometers of canals, the remaining 104 kilometers of natural waterways. Due to the 91.7-meter drop between the Baltic Sea and Lake Vänern, numerous locks were built to allow ships to pass. 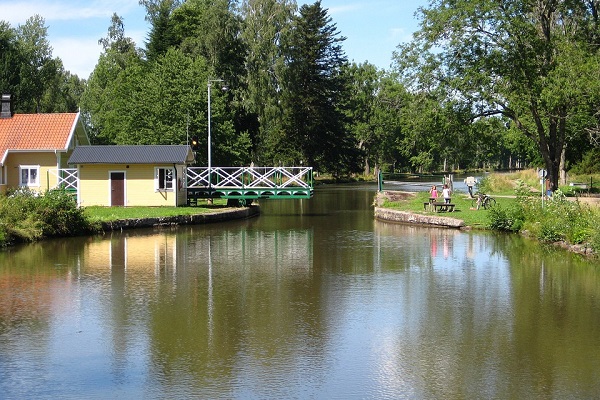 The Göta Canal is 190.5 kilometers long, of which 87.3 kilometers were artificial, ranging from 7 to 14 kilometers in width, and about 3 kilometers at the deepest point. Due to the huge drop in water level, there are 58 locks total. The locks in the Berg section are particularly impressive. Because of the 30-meter drop between Berry and Roxen Lake, seven consecutive locks are used here to allow passenger ships to ascend or descend to facilitate passage slowly. The canal allows ships with a length of 32 meters, a width of 7 meters, and a draft of 2.8 meters to pass.

This waterway attracts many tourists, and thanks to the vastness of the river area, you can still enjoy some quiet and peaceful moments. There are plenty of motor-free cycling and hiking trails in the area, lined with restaurants so you can take a short break along the way.

Many passenger boats cruise along the canal every day. Bird watchers can also find several excellent bird-watching spots on the shore to see birds such as bald eagles and black-tailed godwits. And a medieval Vreta Kloster lies not far from Berg, it is the oldest monastery in Sweden, and is a testament to the country's rich history. 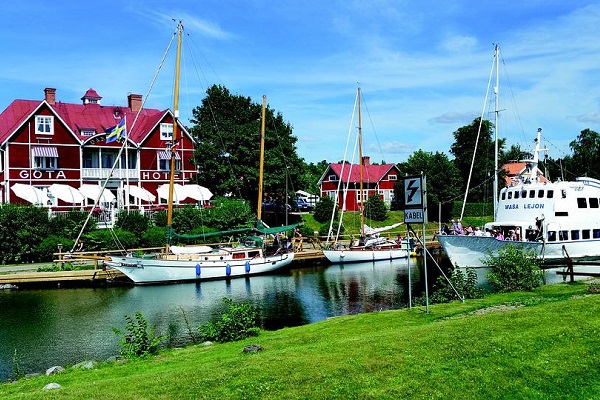 The Göta Canal flows through numerous industrial towns; the functional waterway promotes economic development and shortens the east-west shipping distance by 370 kilometers. The canal is also known as "the blue ribbon floating on Sweden" with the tree-lined and beautiful scenery along the canal, which is a great place for cycling and hiking. In order to protect the natural environment of the canal, part of the river crossing fees paid by yachts will be dedicated to planting new trees. Every summer, up to 3,000 yachts cross the Göta Canal. Since the times of boating season vary from year to year, visitors must know ahead of time.