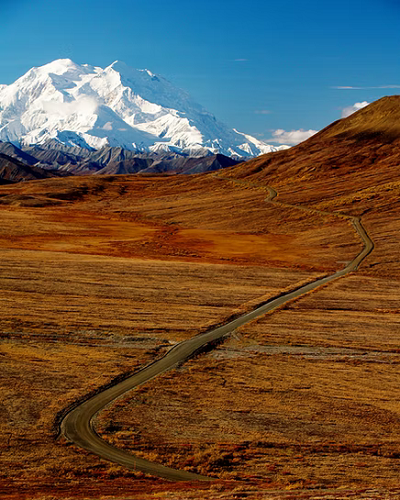 Denali is located in south-central Alaska, the middle part of the Alaska Mountains. It is 6193 meters above sea level and is the highest peak in North America. The Denali region has unpredictable alpine winds, arctic vegetation, and wildlife. Most of the area is covered with snow all year round, and the mountain area is often densely foggy.

The mountain was initially named Mount McKinley after the 25th President of the United States, William McKinley. Mount McKinley was officially renamed "Mount Denali" on August 30, 2015, which highlights the cultural connotation of Alaska's natives. In the language of Alaska natives, "Denali" means "The High One."

Denali is also a gathering place for mountaineering enthusiasts from all over the world. In summer, the slopes of Mount Denali are in full bloom with purple rhododendrons and delicate heathers. Hundreds of people climb the mountain from May to July every year, and less than half of them make it to the top. Mountaineering takes about three weeks.

Denali is a huge dome-shaped mountain uplifted in the late Tertiary and Quaternary periods. The mountain is covered with snow all year round, with a snow line-height of 1830 meters. The southern slope has more precipitation and larger glaciers, with major glaciers such as Cahir Turner and Ruth. Under the golden sun, snow-white peaks, green slopes, and Denali have breathtakingly beautiful views. In 1917, the Denali region was made a national park.

Denali National Park is the second-largest park in the United States after Yellowstone, covering an area of more than 6,800 square kilometers. The park is located remotely, sparsely populated, with a cold climate and unique natural scenery. Four hundred kilometers north of the park is the Arctic Circle. In Denali National Park, people can enjoy the scenery in winter and the hot long white nights in summer; the wonderful polar scenery is amazing. 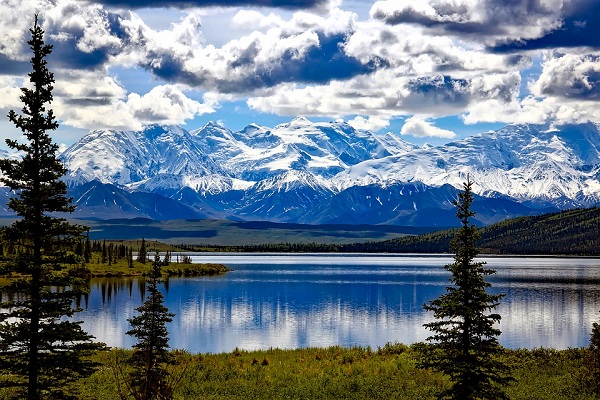 When the weather is clear, you should have a breathtaking view of the Alaska Range and Mount Denali. 6,194meters high, and the mountain towers further above its surroundings than any other on earth. The northernmost mountain on earth is the highest mountain in North America and one of the "Seven Summits."

Denali is also an important sanctuary for wildlife, where common animals include reindeer, grizzly bears, and elk. Every year, from the end of June to the beginning of July, is the reindeer migration season. After winter, they go back the same way. In addition, it is also an ideal place for scientific research on glacial permafrost, polar alpine climate, natural ecology, geophysics, etc.

The climate at the highest point in the Alaska range is extreme. Especially when there is no cloud or precipitation; it is extremely cold on Denali. Temperatures above -15 degrees are rarely reached at the summit; values ​​around -30 degrees are more common, with the cold record around -73 degrees. Due to the warm Pacific Ocean's current influence, the Denali mountain area has a relatively mild climate and is green everywhere in summer. Below 762 meters, green forests dominated by cedars and birches have developed.

Denali, the highest mountain in North America, attracts tourists and climbers from worldwide. For the convenience of ordinary tourists, the national park is responsible for building a winding path that leads directly to the top of the mountain, with a total length of 58 kilometers. However, due to the fickle weather, most of the trails are often covered with snow. Professional climbers need two weeks to reach the summit, while ordinary tourists take about a month. Changes in weather and avalanches kill climbers every year, making it an ideal place for adventurous explorers to come here first to challenge Denali's summit with their physique and wits. 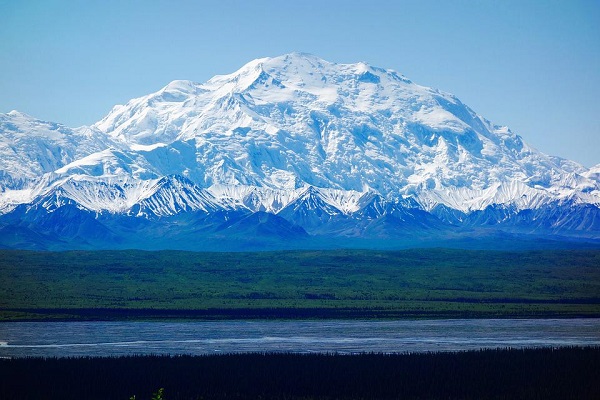 Denali in Alaska officially called Mount McKinley from 1917 to 2015, is one of the most impressive mountains in the world and should not be missed on any trip to Alaska. In Denali Mountains, people can live in Eskimo huts and experience the primitive way of fishing and hunting. Admiring Denali in all its glory always involves a bit of luck. Two-thirds of the time, the peak hides behind clouds. The best time to climb or visit Denali is April through June.