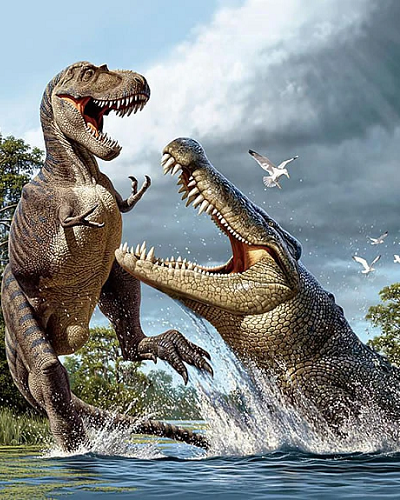 In the past hundreds of millions of years, all kinds of beasts have appeared on the earth that once stood at the top of the food chain. Deinosuchus is an extinct large crocodile belonging to the superfamily of alligators, living on the eastern coast of North America in the Late Cretaceous, about 82 million to 73 million years ago.

Deinosuchus was one of the largest crocodiles that have ever appeared in history. It is called "terrifying giant crocodile" by paleontologists. Many large animals in the late Cretaceous period, including dinosaurs, are its food.

The first fossils were discovered in North America in the 1850s. When archaeologists first discovered the fossil of Deinosuchus, they thought it was some theropod dinosaur, but after research, they found that it should be a prehistoric crocodile. There are more interesting facts about Deinosuchus in this post.

Deinosuchus is one of the earliest paleontological creatures discovered in North America. As early as 1858, geologist Ebenezer Emmons discovered a huge fossil tooth in Bladen County, North Carolina. Later research showed that it was a marine reptile.

In the 1940s, archaeologists Edwin H. Colbert and Roland T. Bird from the American Museum of Natural History restored a pair of fossil fragments found in Texas. The original Cuban crocodile was used as the prototype, and the skull was reconstructed with plaster. According to today's research, the reconstructed skull of the crocodile was wrong, which led to the exaggeration of the body length of the Deinosuchus.

In the decades that followed, more fossils were discovered all over the United States, and although these fossils were fragmentary, they increased our understanding of this ancient giant crocodile. Deinosuchus is an extinct relative to Crocodiles and Alligators. However, studies of its braincase suggest it was more closely related to Alligators.

According to the distribution of fossils of Deinosuchus, this group of giant crocodiles may live in estuaries, and they can also enter the ocean to find food. In the Aguja Formation, some Deinosuchus may have lived in salt marshes or tidal zones, and the largest Deinosuchus fossils have been found in the area.

Deinosuchus lived on both sides of this ocean around the coastal regions of eastern and western North America. Its main competitors as a large predator may have included sharks, marine reptiles like Mosasaurs, theropods like the Tyrannosaurs, and other Deinosuchus. Deinosuchus was probably capable of killing and eating large dinosaurs. It may have also fed on turtles, fish, and other aquatic and terrestrial prey.

Deinosuchus remains incomplete, but better skull material found in recent years has expanded our understanding of this massive alligatoroid. Deinosuchus' huge size has been generally recognized despite the fragmentary nature of the fossils. However, the large size brought only short-lived racial prosperity and eventually led to their extinction. Like all megafauna, the live Deinosuchus was dependent on the environment. When the climate in North America changed dramatically, and the sea receded, the Deinosuchus may have perished due to the loss of habitat and food.