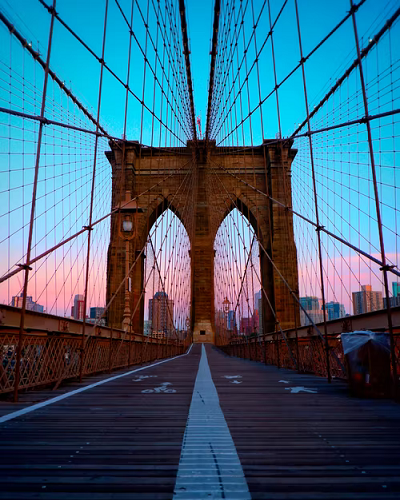 The Brooklyn Bridge spans the East River in New York, New York, United States, connecting Brooklyn and Manhattan Island in New York, and was officially delivered on May 24, 1883. It was the world's first steel suspension bridge and was considered the eighth wonder of the world after the seven ancient wonders of the world when it was inaugurated.

From construction in 1869 to its completion in 1883, the project lasted 14 years and cost 25 million US dollars. And during the construction period of this bridge, except for the designer John Augustus Roebling, more than 20 workers were killed. The sign board above the bridge tower is attached in memory of them. Let's learn more about the actual size of the Brooklyn Bridge in this post.

The Brooklyn Bridge was the longest suspension bridge in the world at that time, and it was also the first bridge in the world to be constructed of steel. It is known as one of the world's seven marvels of architectural engineering in the industrial revolution era. The bridge designer was John Augustus Roebling, who came to the United States to start a business with the technology he learned in Germany. His son, Washington Roebling, a promising engineer, also believed the bridge could be a success. Both engineers made great efforts for the project and had accidents during the construction.

Since its unveiling in 1883, the bridge has provided a safe and beautiful passage for millions of trains, bicycles, and carts, making life easier for commuters and tourists alike. The Brooklyn Bridge supports six lanes of vehicles and a shared pedestrian and bicycle path. Today, an average of 120,000 cars, 4,000 pedestrians, and 2,600 bicycles cross the Brooklyn Bridge daily. 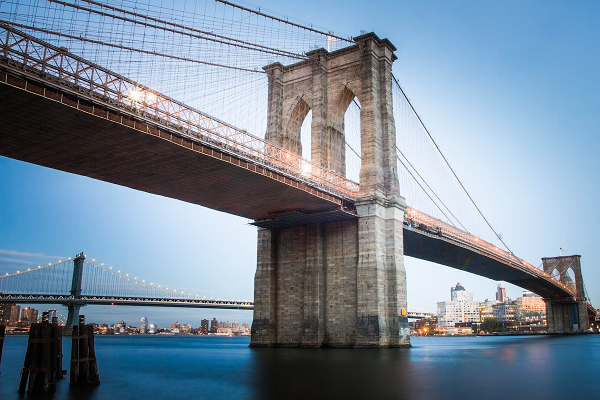 The Brooklyn Bridge is 1,834 meters long (including approaches); the main span between the two suspension towers is 486.3 meters (1,595.5 feet) long and 26 meters (85 feet) wide on the East River. And the bridge body is suspended 41 meters above the water by tens of thousands of steel cables. The bridge tower is about 87 meters high and has become one of the iconic buildings in New York. 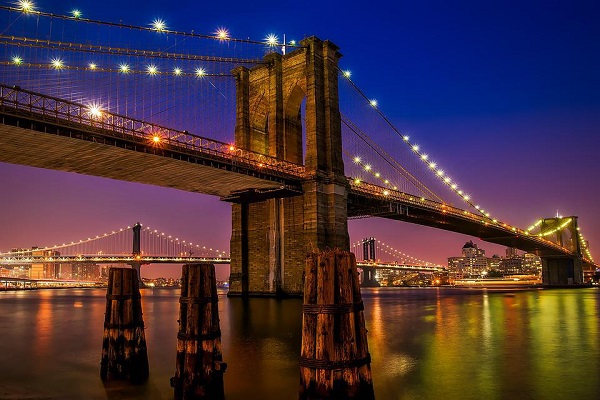 The Brooklyn Bridge is unique in New York City's history and has been the location for many of the world's most famous classic movies and TV series. It is the oldest of the three bridges connecting Brooklyn to Manhattan. The bridge's appearance is gorgeous and elegant, and the towers and iron cables are the objects that painters compete to depict. Walking is the best way to see the Brooklyn Bridge. The best angle is walking across the Brooklyn Bridge towards Manhattan to enjoy the New York skyline.