Basking sharks are large marine creatures. They have an obvious phenomenon of vertical movement between day and night and often float on the water when the weather is clear. At other times, basking sharks inhabit the deep water layer below 100 meters, and the deepest can reach 700-1000 meters. The basking shark is gentle and slow by nature and does not even run away when boats approach it.

As the second-largest fish in the ocean after whale sharks, basking sharks look terrible and often have big mouths, but they are gentle and shy animals. Their mouths can open to 1m wide, and their weights range from 6,000 to 10,000 pounds. With such a terrifying size, basking sharks only eat plankton. The following post will make you more familiar with this large marine animal.

The Basking Shark is the second-largest extant shark species, only smaller than the Whale Shark overall size. Compared to Great White Sharks, they are much larger. Like whale sharks, basking sharks are filter feeders that grow to enormous size while eating the ocean's smallest organisms.

The basking shark has a large, light grey body, darker on the top side and lighter underneath. It has a large, black, triangular dorsal fin on its back. The shark's wide-opening jaw is white inside with black gill rakers, finger-like structures that prevent food from escaping through the gills. The mouth has several rows of very small teeth. 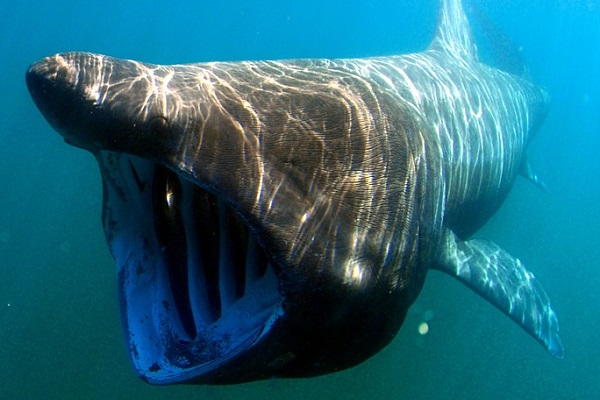 Basking sharks inhabit the continental shelf and island shed waters of the open sea but often appear on the shore, the periphery of the intertidal zone, or the inner bay, usually 1-3 or as many as 100 tails cruising slowly on the water surface, the dorsal fin will come out of the water. The basking shark is one of a few species that live in temperate latitudes, both north and south of the equator, and has a seasonal migratory habit.

The basking shark exclusively feeds on microscopic animals called zooplankton, which it catches by opening its mouth and allowing water to flow over its enlarged gill slits. Zooplankton in the water is then trapped in gill rakers covered in mucus. These sharks will follow groups of zooplankton from the ocean's surface to over 3000 feet deep. Basking shark shoals will migrate thousands of miles every year, chasing the best zooplankton blooms.

Due to their slow movement, docile nature, and lack of sharp teeth, basking sharks have long been a target of the fishing industry. However, its populations have dwindled considerably due to all the harvesting, and the shark is now considered Endangered.

Basking sharks are the second-largest fish in the ocean, but they are not known to be aggressive or dangerous and will often circle groups of snorkelers and divers calmly. As a filter feeder, basking sharks have no desire to eat humans or other large animals. 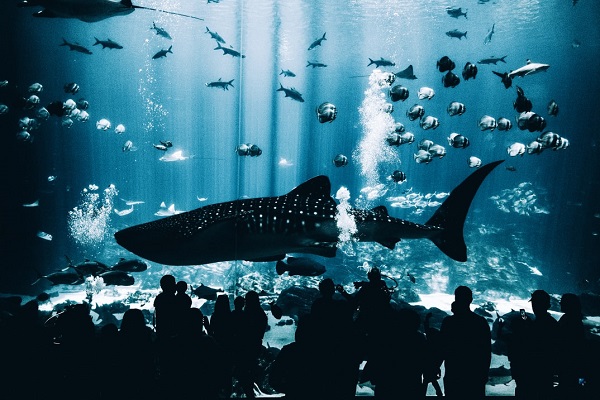 Basking sharks are generally harmless, but scientists urge the public to maintain an appropriate distance when viewing. Biologists warn to keep at least 4 meters away from the basking shark to avoid scaring it. Basking sharks are an endangered species needing protection under EU and UK law from fishing and harassment.