Jellyfish can be said to be one of the most amazing marine creatures in the world. They are like a cloud of mist but have transformed into various shapes and colors. The jellyfish family is so huge that there are more than 250 kinds of jellyfish named by humans. They basically maintain a considerable reproduction rate, and there is no risk of extinction. Here we introduce a unique glowing jellyfish that is like a siren.

A red body characterizes this deep sea jellyfish, and they will light the body when attacked, exposing the attacker to the sight of its predators and escape from the hunting. Like all jellyfish, Atolla jellyfish do not have a complicated digestive system, respiratory system, circulatory system, or brain. These jellies grab any prey animal swimming by with their tentacles. This tentacle might also be used for reproduction. You will get more details about this lighting jellyfish.

Atolla jellyfish is a special species composed of floating capsules and radial ribs. Through the radiation partitions on their bodies, the luminous gas in the body is released, thus emitting a dazzling light in the deep dark sea. Many small verrucous protrusions are on the back of the floating capsule, especially near the center. There are stems on the ventral surface, including macrotrophs, micrographs, genitals, etc. Above the crown groove, the center of the bell is thick and convex. They have about 20 tentacles floating off their bell and then one long one hanging out, trying to trap prey to eat.

Normally, Atolla jellyfish live at a depth of 1,000-4,000 meters; they appear completely black to predators, letting them hide in plain sight. Once in danger, attacked by prey, and physically traumatized, they will emit dazzling light to attract the predator's natural enemies, thereby destroying the predator and escaping. 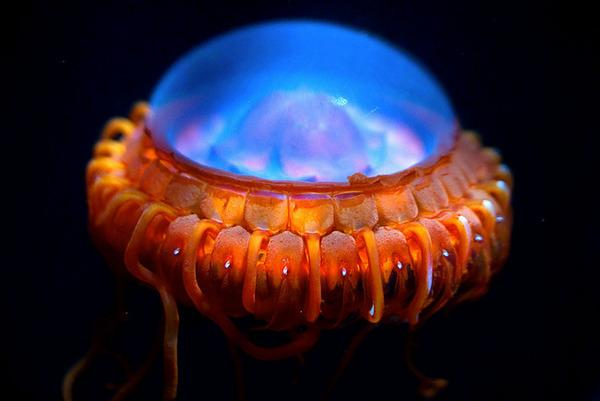 Atolla jellyfish live very deep in the ocean, from 1,000 to 4,000 meters deep. They have a bell width between 2-17 cm and an overall length of 4-35 cm. There is few information on how long these marine animals live. However, most jellyfish, according to the study, have a maximum lifespan of one year. 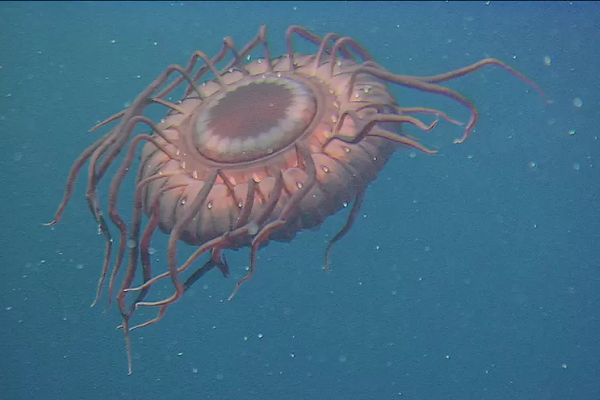 Atolla wyvillei is a coelenterate living in the deep sea hundreds of meters below and is a typical deep-sea jellyfish. This species is also called the "alarm jellyfish" as it flashes its bioluminescent red when it is under attack because they are not poisonous enough to kill the predator, nor do they have the fast speed to escape quickly. The fantasy of the natural world is vividly reflected. Atolla jellyfish can use bioluminescence to call for help. Once a predator captures them, their bodies emit a conspicuous light, hoping to attract the attention of a larger, more fearsome predator, causing the current predator to give up hunting.