The Atlantic blue marlin (scientific name: Makaira nigricans) is a sailfish endemic to the Atlantic Ocean. The snout is long and pointed, protruding like a sword; the back is blue-brown, the abdomen is silvery white, and the side of the body has a white horizontal band.

Atlantic blue marlin is an oceanic pelagic migratory fish, generally found in the waters above the thermocline, less often in groups along the coast or around islands. This species is widely distributed in the tropical and subtropical waters of the Atlantic Ocean, Pacific, and Indian Oceans; a few will enter the temperate waters.

Atlantic blue marlins are bluish-black on the back and silvery white on the belly; their bodies are covered with thick, long bony scales. They have 15 rows of pale cobalt stripes, each with dots or fine stripes. The membrane of the first dorsal fin is dark blue or nearly black, without spots or markings. Other fins are generally brownish black, sometimes dark blue. Atlantic blue marlin can change color, typically turning bright blue when hunting. This ability to change color comes from pigment cells and light-reflecting cells. 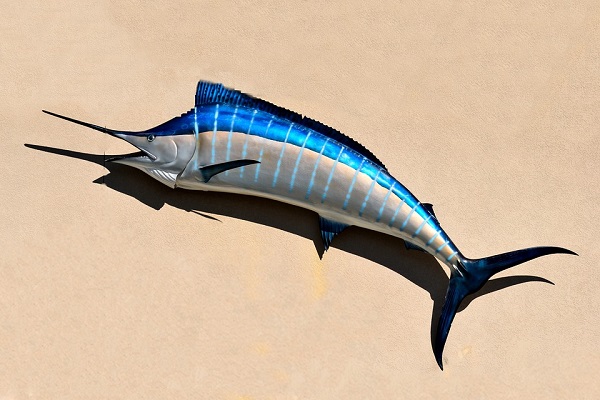 Atlantic blue marlin swims fast and has the habit of breeding and migrating. The latitude of blue marlin distribution will change with the seasons, from 45° north latitude to 35° south latitude. They generally inhabit sea areas where the water temperature is higher than 24°C, the highest water temperature can reach 30.5°C, and the lowest is 21.7°C. In addition, they tend to spread northward during the warmer seasons and concentrate near the equator during the colder seasons. The Blue Marlin loves the deep open ocean and migrates to follow the warm ocean currents. 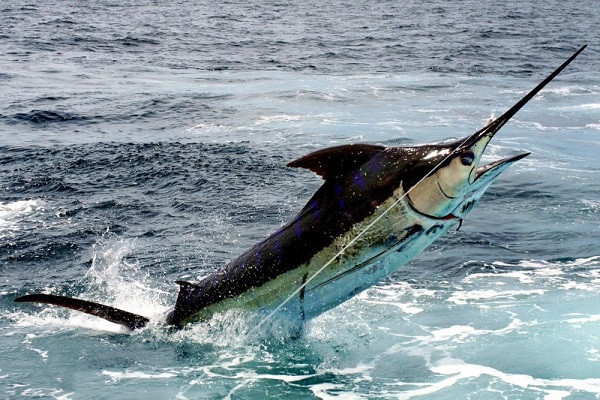