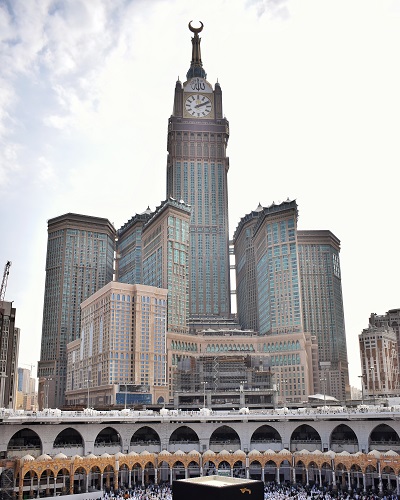 Abraj Al Bait, also known as Makkah Royal Clock Tower, is a complex of seven skyscraper hotels in Mecca, the holy city of Islam in the Kingdom of Saudi Arabia. The Makkah Royal Clock Tower usually refers to the clock tower in the middle of the complex; the tallest one is a hotel with a height of 601 meters and a total of 120 floors.

The Tower is currently the fourth-tallest building in the world, after the Burj Khalifa Tower, Tokyo Skytree, and Shanghai Tower; it is also the tallest hotel in the world; the entire complex has an area of 1.5 million square meters and the floor area is also the largest in the world.

Mecca is the holiest place for Muslims in the world; the Abraj Al Bait is only 50 meters from Islam's holiest site Kaaba, which is surrounded by the Masjid al-Ḥarām (the Grand Mosque), the largest mosque in the world. The unique location and the significant height of Mekkah Clock Tower make it the city's new landmark. Let's learn more about the actual height of the Makkah Royal Clock Tower.

Abraj Al Bait was built by the Saudi Bin Laden Group, the largest construction company in the Kingdom of Saudi Arabia. Nowadays, the Abraj Al Bait has the world's tallest hotel, the world's tallest clock tower, and the world's largest floor area. Abraj Al Bait has the largest floor area among the skyscraper buildings in the world; it is composed of 7 individual towers of different heights; aside from the central clock tower, all the other shorter towers are over 230 meters, and the two beside the Middle Tower stand 280 meters.

Abraj Al Bait appears very imposing and magnificent with all these giant buildings connected together, far more majestic than Ryugyong Hotel in Pyongyang. The functions of the Abraj Al Bait include:

It is mainly used as a hotel with 858 suits, operated by Fairmont Hotels and Resorts, a Canadian operator of 5-star luxury hotels. The significant height of the tower makes it visible in some remote places as far as 17 kilometers away. 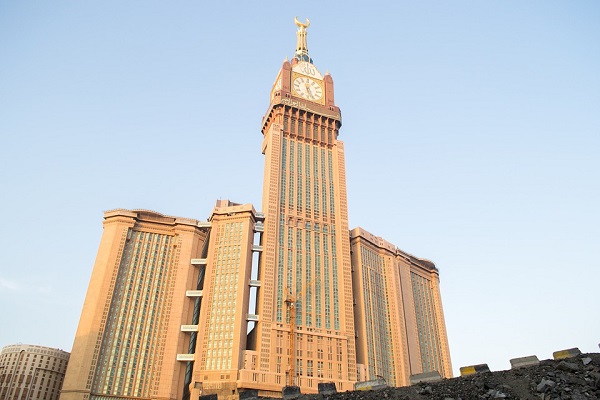 The Makkah Royal Clock Tower stands in the center of the complex with a height of 601 meters (1,972 feet) and a total of 120 floors. And the highest point is a golden Muslim crescent moon; it contributes 23 meters to the tower's height, approximately equal to the height of a 7-story building. The tower is five times larger than the famous "Big Ben" on the top of the Houses of Parliament in London.

Size of the Clock in Abraj Al Bait 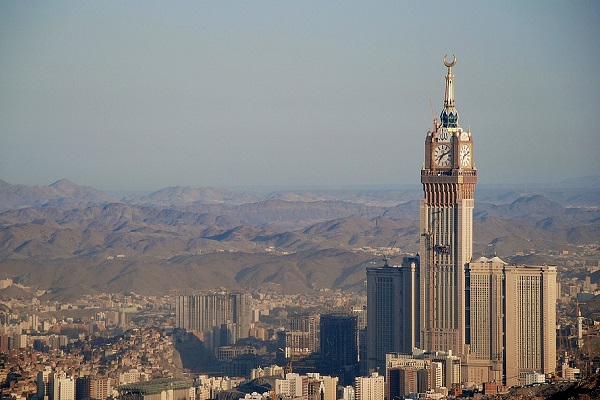 According to reports, the Abraj Al Bait was jointly designed by German and Swiss engineers, and the entire project is expected to cost $800 million. According to the report, the clock tower's primary purpose is to proofread the standard time during the pilgrimage period. During the construction of the Abraj Al Bait, the government of Mecca leveled a nearby mountain. It destroyed the fortress from the Ottoman era to harmonize the surrounding environment with the building. Such a move has drawn residents and critics back against the building, calling it "absurd architecture" and a "kitsch rendition of Big Ben."